For the last eighteen years or so, Jesse and I have attended the annual convention of the National Federation of the Blind which typically falls over the first week of July, including Independence Day. This year however, circumstances were such that we did not attend, so for the first time since being a teenager, I was home for the holiday. We decided to take advantage of this and celebrate in a more traditional American fashion—parade, hamburgers, and fireworks.

Over the years, I always tried to find a way to get out of the hotel (and usually a meeting) to go watch a firework display wherever we were. I have to say that I’ve had the opportunity to watch fireworks in some fun places—echoing off the foothills of my beloved Utah, the US. Olympic Centennial Park in Atlanta, on the river between Michigan and Canada, atop a roof in Orlando where I could see Disney World, Universal, and Sea World all at the same time, and in Philadelphia for the 225th anniversary, one of my favorites, . But, the fireworks show I watched this year definitely will be at the top of my list. 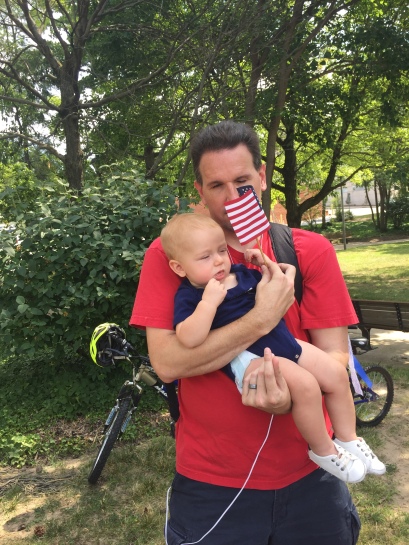 After taking our kids to watch the parade and out to lunch, Jesse and I were reminiscing to each other about our holiday traditions while growing up. Stories of our dads lighting off fireworks bought from the local stand were top on the list. So, Jesse and I got the notion that maybe we’d try our hand at lighting off some fireworks ourselves for our kids this year. Our kids have never experienced this either since we’ve taken them to the convention with us every year since they were born. Neither of us had any experience actually lighting a firework before, but we had some ideas of how we could do it non-visually. So, after returning home from our morning adventures, my six-year-old daughter and I made a trip to Target and I bought a box of fireworks for the first time. Of course, I had to get customer service to show me where the fireworks were, and the cashier had to see my ID before she could ring up the purchase, so I half expected the police to be waiting for me as I left the store or at least a manager telling me that they couldn’t in good conscience sell fireworks to someone with a cane, but no one even seemed to bat an eye over it.

To my children, the four hours that passed by from the time I returned home until we began our show passed like molasses, but finally the moment came. We gathered up our box, fire-starter wands, and a stock pan of water and headed out to the curb. Jesse and I agreed that we’d look at the different fireworks in the box and only try this out if we thought we could actually do it. We really wanted to make sure we and our kids were safe. After securing access to the hose in our front yard too, we placed our almost-one-year old in his car seat on the front walk while the other two children sat on the front steps. I breathed a sigh of relief when I saw our nearest neighbors drive off for the night. At least we wouldn’t have an audience—aside from our children.

I took the first go at it selecting a small firework that resembled a Hershey’s kiss. This proved to be one of the most difficult kind of fireworks for us as it kept tipping over and it was hard to catch the fuse. But, after a few moments of trying, it ignited and shot off! I’ll admit it scared me to death, but was quite a rush and I felt so empowered! And if you’re thinking that my bit of residual vision was any help, you’d be wrong. It was dark, and there was no way I was going to put my eyes down near the fuse to try and see what I was doing. Not to be outdone, Jesse took a try at the second one. He chose a larger cylinder-like one. After another few moments, he too was successful.  By this time, more people around our neighborhood had started launching their own which startled our infant who began crying, so I ended up holding him in a carrier the remainder of the time and was happy to let Jesse light off the rest himself. We were a little slow since it took a few minutes between each firework for us to set off the next one—there was a bit of a learning curve between the different types—but we managed to set off the whole box. Later, two sets of our neighbors came over to chat as they returned home from their evenings, but neither seemed to think anything of their blind neighbors lighting off explosives. (for all we know, they could have all been watching us out the window, biting their nails, and with fire extinguishers at the ready.) This really said a lot though to Jesse and me about how we’ve proven our capabilities to them over the years.

After the last one—and we saved the best for last—Jesse and I slapped high-fives with our daughter who managed to stay awake until the end; and then hugged each other in triumph and relief , grateful that we still had all our appendages and hadn’t started any fires. We cleaned things up, put our kids to bed, and then just sat together in our living room basking in our success, feeling almost giddy with delight at our accomplishment. Jesse deserves most of the credit though and I was so proud of him. Of course, this also deserved a post on Facebook. Here is what Jesse said:

July 4th at 10:53 p.m.: Today our kids asked if we could shoot fireworks off at our house. So for the first time in my life my blind but was lighting fireworks independently. Getting that dad thing done!

You may be wondering how we actually accomplished this. It’s kind of hard to explain without just showing or doing it, but here are a few strategies we figured out:

We definitely wouldn’t advocate anyone trying this without feeling comfortable or at least having some prior experience doing something similar like lighting candles, cooking over a flame, etc. In any case, it showed once again that the training we received can transfer to other aspects of life and that with confidence, skills, and maybe a little bit of guts, you can accomplish anything! Years from now, this may just be something we do each year without thought. Our kids will probably never know how nervous we were that night or how empowered lighting a little sparkler made us feel. Hopefully, they’ll just think of it as their parents doing normal things, but for the two of us, it will definitely stand out as “the best firework show ever!” This year we not only celebrated the independence of our nation, but also our own little moment of independence proving to ourselves once again that blindness doesn’t have to be a barrier that keeps us from enjoying our life or sharing certain experiences with our family, and for that we are most grateful.